We organize all of the trending information in your field so you don't have to.
Join users and stay up to date on the latest articles your peers are reading. 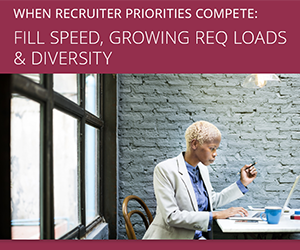 It’s a question as old as the recruiting profession itself: How many reqs should one recruiter handle at a time? Even in our data-driven age of hard metrics and objective assessments, the answer is: It depends.

With the unemployment rate at 3.6% (a level not seen in nearly 50 years) and the volume of open jobs at a 17-year high, competition is rising; requiring recruiters to do more with less — and that often means individual recruiters must take on more reqs just to keep making placements.

However, that doesn’t mean req loads are random. Rather, it means that “How many reqs is too many reqs?” is a question that can only be answered on a case by case basis.

But what data should an organization consider? In this White Paper, BountyJobs lays out the key factors that go into finding your answer to the req load question.

Join by signing up for our newsletter